Last week I took my classes to the Museum at FIT to take a look at the “Fashioning the 70s” exhibit. The work of Halston and Yves Saint Laurent (or YSL as students told me) were set side by side to showcase the similarities between the designers and to also express the spirit of the times. Since we had been discussing culture in class, and because I’ve been working on a paper on the 1970s feminism, I was excited to hear students’ thoughts. We watched a few “Smarthistory” videos before looking at the pieces to get us ready to have a conversation about art, fashion, and dress. If the exhibit were still open, we’d be making our own smart history videos and this will definitely be a project for my next class.

A central conversation from both of my classes revolved around how modern these clothes look, especially the Halston pieces. Some students thought that the only way the pieces were dated was through the materials, heavier wools, or through the wide cut of the legs. We also talked about how “anything goes” in fashion now.

To connect the exhibit to one of the major social forces of the 1970s, second wave feminism, here’s a brief excerpt from my paper on the role of “consciousness raising” (CR). I see the influence of feminism in clothing and will sketch out the connection below:

By connecting women’s personal struggles to larger social forces, feminists in the 1970s engaged in a political project that aimed to restructure “present conditions,” often beginning with intimate, sexual relationships. Feminists believed consciousness raising (CR) held great potential for them, as can be gleaned from their political goals: they wanted nothing less than “total change promised in revolution” (Dever 2004, 39). As Johanna Brenner (2014) points out, second-wave feminists wanted to change women’s material conditions by redistributing wealth through guaranteed income, paid maternity leave, and socialized care. Moving from the personal to the political was done through CR: through sharing personal stories, women found commonalities and connected their experiences to systems of oppression. Carol Hanisch’s (1970) seminal essay “The Personal Is Political” describes how consciousness raising differs from therapy: “These … sessions are a form of political action. … One of the first things we discover in these groups is that personal problems are political problems. There are no personal solutions at this time. There is only collective action for a collective solution.” Through CR work, Hanisch (1970) argues, “we came early to the conclusion that all alternatives are bad under present conditions,” wherein “present conditions” meant capitalist patriarchy. One of the main goals of second-wave feminism was to democratize analytic skills so that all women could build a political movement from the bottom up, or from the inside—their psyche—out. CR was thus considered a “radical weapon” to combat the more affective forms of male domination (Sarachild 1978).

Feminists of the second wave also used the phrase “woman identified woman” to counter the importance of ‘finding a man’. They asked us to consider why, when, and how, women started to arrange their lives around men instead of other women. By questioning when, in a woman’s life, her allegiances shift from her mother, sisters, friends to her husband, feminists challenged a fundamental element of modern society: the nuclear family. What if we arranged our lives around our friendships with other women, instead of husbands–feminists asked. Questions such as this highlight how society would, or could, changed if women’s experiences and relationships were taken as the starting point, the norm.

In thinking about how the history and culture of the 1970s, especially the rise of the women’s movement, influenced the fashions of YSL and Halston, I keep coming back to the simplicity of the pieces. (Bare with me, I don’t know the technical terms for garment construction!) The Halston pieces especially strike me as showcasing a woman’s body without a lot of artifice. Or, the clothing does not allow or call for slips, bras, corsets, panty hose–these clothes are not the severely tailored shapes of the 1950s. Jo Paoletti, a scholar of fashion and history, writes that the unisex styles of the 1970s “unisex clothing was a baby-boomer corrective to the rigid gender stereotyping of the 1950s, itself a reaction to the perplexing new roles imposed on men and women alike by World War II.” I see this in the pieces, especially the Halston, at the exhibit. The clothes flow. They do not try to restrain the female body. They’re for women on the move, whether going to work, to party, or to feminist rallies. Of course, the pieces were probably beyond the (economic) reach of most women but they seem to be designed for a woman-identified-woman. (and I’m leaving aside a discussion of what type of body could wear these clothes; a skinny body for starters.)

Ok, so here are some of the pieces that capture the spirit of the 1970s, feminism, and a more “woman-identified-woman” sensibility.

This piece speaks to the free-flowing look–one that demands nothing but a body. Bras, wires, undergarments could not be worn here. Also, this looks like something a greek goddess would wear or an ancient philosopher, if a woman could have been one, which she could not have been. As I stated above, through CR, women were all encouraged to become philosophers in the 1970s. 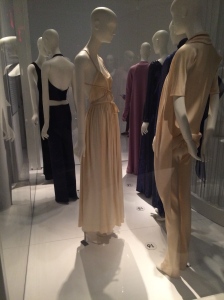 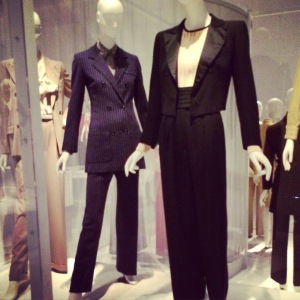 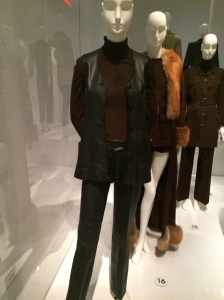 All of the above look like clothes for the feminist revolutionary gang, for women who are seriously in charge. As Paoletti describes, the unisex trend–of which these clothes fall–“tilt” towards masculine.

In another post, I’ll connect the look of the 70s to some from modern designers–Rachel Comey and Horses Atelier.